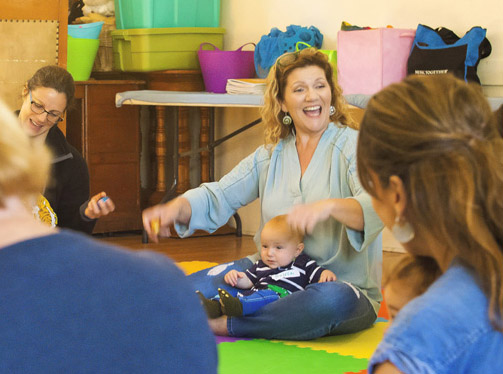 Since 1996, MusicalMe, Inc. has been offering the renowned Music Together® Early Childhood Music Enrichment Program for children newborn through age 8. Over 50,000 students have been served through MMI in Santa Cruz, Santa Clara, and Monterey Counties in California. As the original parent-child music program, Music Together has enriched the lives of families around the world for over twenty-five years.

Since its founding in 1987, Music Together has communicated its basic philosophy – that all children are musical – through developmentally appropriate, research-based classes for children ages birth through kindergarten and their parents and caregivers. Hundreds of thousands of families have come to love Music Together classes....and music! Music Together classes nurture the inherent music lover in us all through play.

Ever wonder where the "Happy Birthday" song came from? Well Music Together shares history with the iconic song, as well as the ability to light up children's eyes and hearts. More than 100 years ago, Patty and Mildred Hill composed the beloved birthday song as kindergarten teachers. Patty, who became a distinguished professor of early childhood music education at Columbia Teachers College, then taught the song to her students, who would then spread it around the country.

"My family got involved," explains Ken Guilmartin, co-author of the Music Together materials and founder of the Center for Music and Young Children (CMYC), "when my grandfather, John F. Sengstack, an accountant and amateur violinist, bought a small eduational music publishing company." When he learned that his new company had published the original song, he informed Patty Hill of the potential royalties from the birthday version. They published and copyrighted the song as "Happy Birthday to You," and set up a foundation for early childhood organizations to receive the sisters' share of the royalties.

Years later, after the company had passed to Ken's uncle, David K. Sengstack, it was the "Happy Birthday" royalties that funded a one-man research and development department named Ken Guilmartin. Ken used the funding to start CMYC and begin work on what eventually became Music Together. "I've always thought it fitting," says Ken, "that Music Together can trace its lineage back through 'Happy Birthday' to two early childhood educators. I think the Hill sisters would be pleased, too."